An Interesting Reaction You Can Do at Home: Vinegar and Baking Soda
LIFE /
by AARON BERNIER
/ SEPTEMBER 8, 2022

The best way to teach science is through fun activities! In fact, most scientists get so excited about their work and they would try all kinds of weird things just to see what will happen. And nothing is better than using many of the things you already have in your house to learn some science and have fun at the same time! In this post, you will find out about the baking soda and vinegar reaction! Your kids will have great fun, and you can join them too. It is not dangerous but you will want to ensure they do things safely anyway! Of course, for those of you who are no longer a kid, you will also find out what useful things you can accomplish by the reaction of vinegar and baking soda. So go grab some vinegar and some baking soda, or else called sodium bicarbonate, and let's have fun!

First, go and find some white vinegar and some baking soda. Things will be more fun if you have some food coloring too. You can get green, orange, yellow. Then, find a big table that you can clean easily because things can get messy! It will help if you find a large tray to put everything inside. Find a few small containers and put a bit of vinegar, about a centimeter height in each, and a few drops of the coloring. Then, take a spoonful of sodium bicarbonate and drop it in the pot of vinegar! You will see that the baking soda and vinegar reaction causes the colored vinegar to start bubbling so much that will likely come out of the container like a volcano!

What do you think is happening? What you see is bubbling and that tells you there is gas forming, and you confirmed it with the balloon experiment because you saw it inflating. To understand what is going on we need to know what is vinegar and what is sodium bicarbonate.

Vinegar has, among other things, acetic acid (CH3COOH), and sodium bicarbonate is NaHCO3 which is a base. Acids and bases react easily. The reason is that acids have a hydrogen in (H+) that they can give easily away, and bases can accept that hydrogen ion. In this case, the acetic acid gives a hydrogen ion in return for the sodium ion (Na+) and becomes sodium acetate. The Sodium Bicarbonate then takes the hydrogen ion, after giving the sodium ion, to become carbonic acid:

The carbonic acid is unstable and breaks to water and carbon dioxide, and this is the gas you see! The sodium acetate also dissolves in the water. So the whole two-step process is:

As you see, the baking soda and vinegar chemical reaction are not that complicated as long as you know the basics. 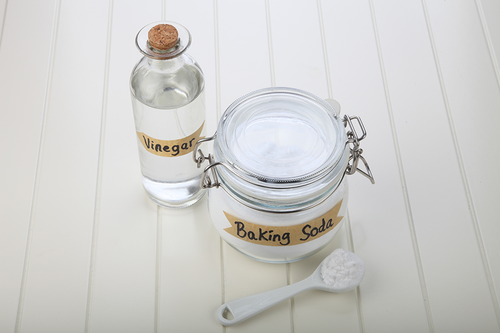 There are many uses for sodium bicarbonate and vinegar around the house. Vinegar is said to be a good cleaning agent that also kills bacteria. You can use it to clean shower heads, remove sticky labels and clean glass. You may even add some white vinegar in your washing to remove the bad moldy smell that some clothes have. Sodium bicarbonate is used around the house to trap bad smells. However, unclogging blocked pipes or removing debris from your kitchen drain is probably the commonest use of vinegar and bicarbonate together. Pour half a cup of baking soda inside the drain pipe of your kitchen and then pour half a cup of white vinegar. The bubbles that form from the vinegar and baking soda reaction will rattle the debris and cause them to become loose, and the vinegar and bicarbonate will cause the fats to turn into soap and glycerin. It helps if you block the drain to help push the debris down by the pressure built up. Then, after a few minutes, you can clean the pipe by pouring boiling water to flush everything away.

Had A Fun yet?

I am sure you can think of many other ways you can have fun with baking soda and vinegar reaction and the bubbles formed! People have made volcanoes, do-it-yourself fire extinguishers, rockets, and many other things! Just remember that you should take care not to mix too many things together (for example professional drain cleaners have many other chemicals that can form dangerous gases if mixed with vinegar and sodium bicarbonate) and be ready to clean the mess afterward! For a video demonstration and discussion about sodium bicarbonate and vinegar, follow this link: