Iceland is blessed with stunning nature, rich arts and culture, as well as great food. In Iceland, prepare to experience wonderful contrasts in nature, like looming icecaps and effervescent volcanoes, cold dark days and sunlit nights, brightly colorful skylines and black beaches. A holiday in Iceland is not determined by season, as the country has different offerings in summer and in winter! In the winter, when the days are short and the nights long, visitors can enjoy skiing and snowshoeing. The beautiful Northern Light is also a feature of Iceland's winter nights. In the summer where daylight is unending, visitors can go hiking, scuba diving, and sightseeing. There is never a short supply of things to do in Iceland.

1. Get a Breathtaking View of Reykjavik at Hallgrimskirja

The fabulous architecture is a must-see in Iceland. This nature-inspired Lutheran church is not only the biggest church, but it is also one of the tallest buildings in the country. The architectural masterpiece was made with the inspiration of notable landmarks in Iceland including the basalt salt flows and the Black Fall. At the top, the view is simply breathtaking. Visitors are treated to a panoramic view of Reykjavik and the surrounding mountains. During the Reykjavik festival held every winter, the church is usually lit up, and what a sight that is! Visitors to Hallgrimskirja are not only usually amazed by the view, but they are also usually impressed with the interior of the church as well. Thinking of what to do in Iceland? Visit this church. 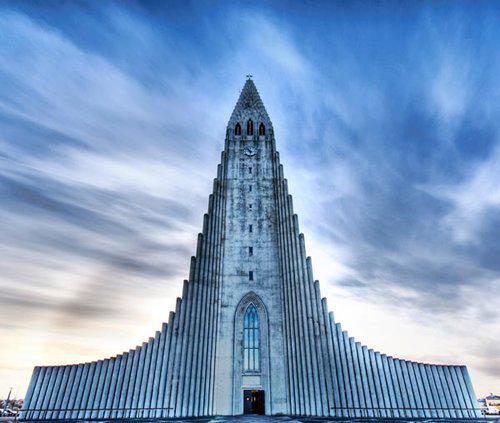 2. Enjoy the Scenic Waterfall at Gulfoss

"The Niagara Falls of Iceland and a natural wonder!" Those were the words of a visitor after a trip to Gullfoss. This huge waterfall cascades down elegantly and majestically. Some visitors say that Gulfoss, which means Golden Falls, is the most beautiful waterfall in Iceland, and it is at the top of their list of things to do in Iceland. Hikers are in for a treat, as walking the trails offers different views of the waterfall. This pretty site has a heartwarming story behind it. In the early 20th Century, Sigriður Tómasdóttir, whose family owned Gullfoss at the time, fought efforts made by people to use the power of Gulfoss to produce electricity. Because of her stance, the beauty of the waterfall was left untouched. In Iceland, visiting this waterfall is a sign of respect for Iceland's first known environmentalist. 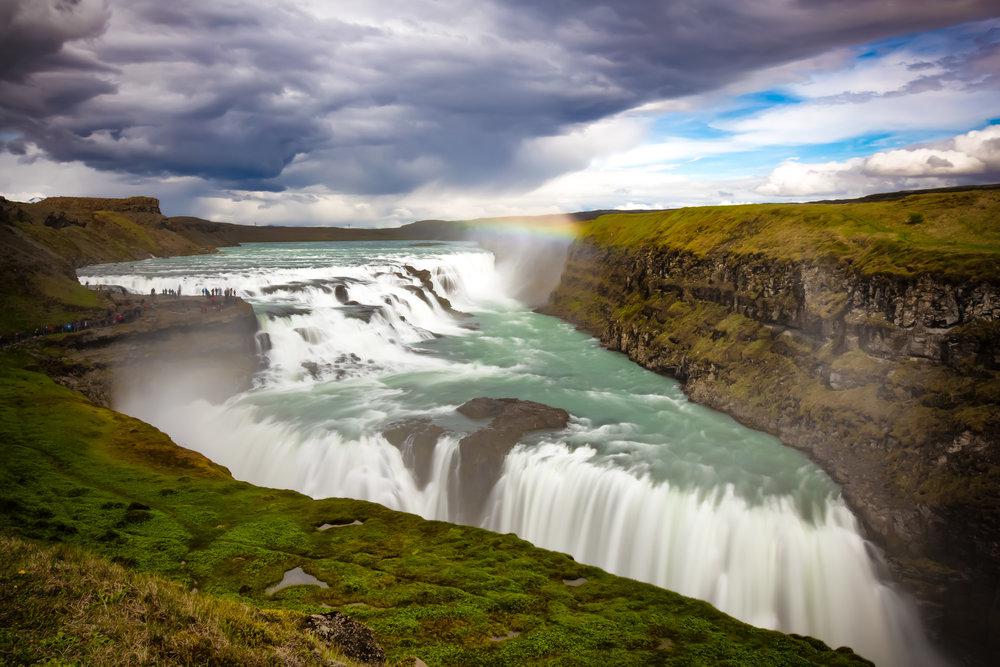 What are visitors saying about the Golden Circle? "It is a must-see route in Iceland!" The Golden Circle encompasses three major sites in Iceland including Þingvellir, Gullfoss, and Geysir. The Golden Circle route allows you to spend the day not only enjoying the excellent route, but you will also enjoy stops to see the eruptions in the Geysir geothermal field, hot springs, and some of Iceland's most popular national parks. 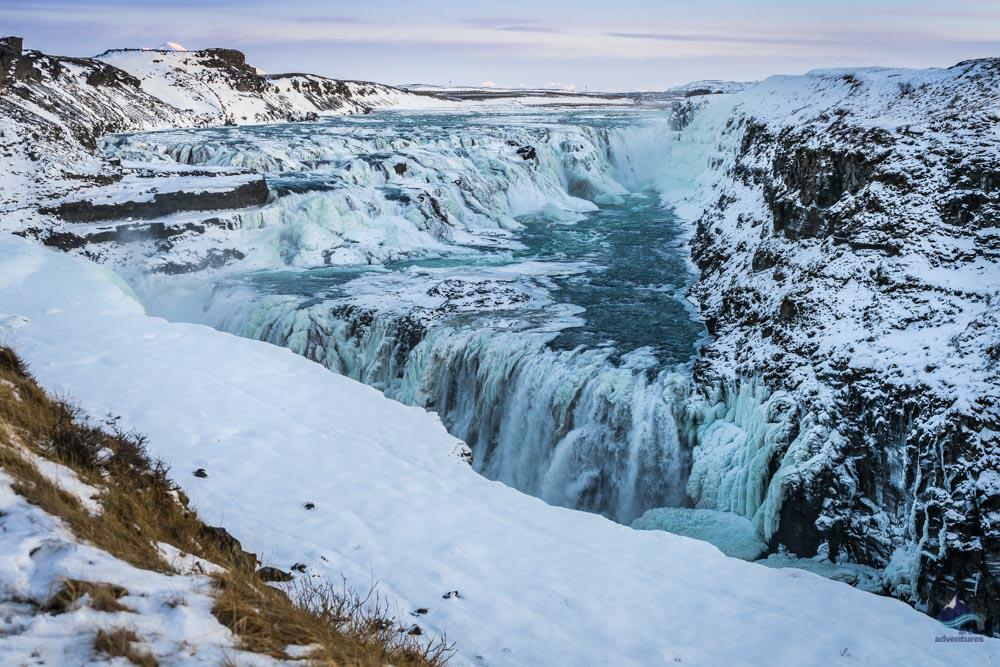 This park is known as the national shrine of Iceland since it is an important location in Icelandic history. It is also honored as the oldest location in the world to host a parliament, as Icelandic parliamentarians first assembled there in 930 AD. For this reason, it has been named a UNESCO World Heritage Site. The site is also protected as a national park because of its wonderful natural features and geology. Still wondering about more things to do in Iceland? You can go fishing or scuba diving in the waters surrounding the Thingvellir. Fish and other life forms thrive in Pingvallatan, the biggest lake in Iceland. 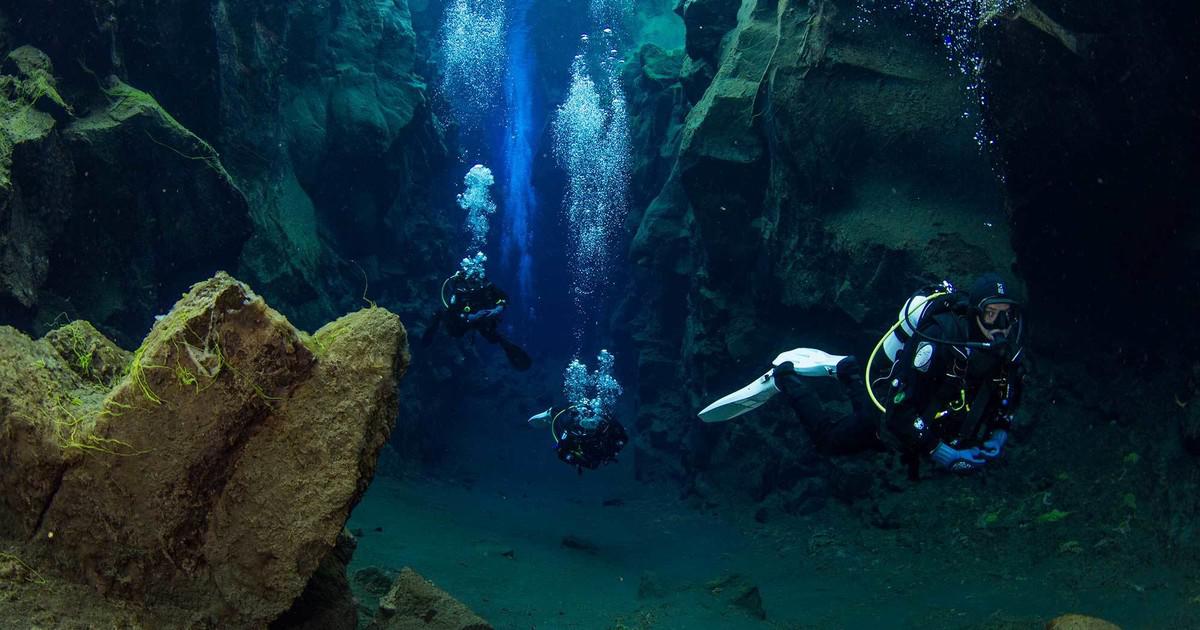 5. Immerse Yourself in Icelandic History at the National Museum of Iceland

It is always a good idea to learn some of the histories of the place you are visiting. The National Museum of Iceland offers that and so much more. Here, you can get a close look at the rich Icelandic history. The museum hosts exhibitions and displays that show Iceland's history from the time when Vikings had settled in the area. The museum also houses thousands of artifacts gathered from all over the country. 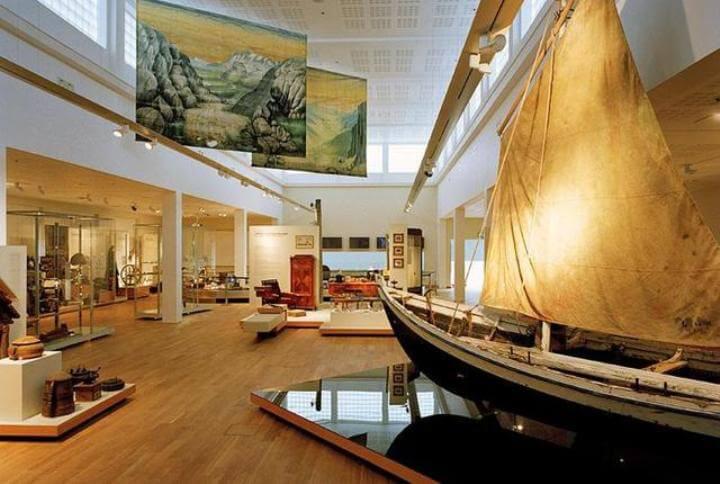 6. Be Entertained in Harpa Reykjavik Concert Hall and Conference Centre

A visitor to the concert hall and conference center says: "It is worth a visit even if it is for the architecture alone." This distinguished landmark is an architectural masterpiece and it is usually lit at night to emulate the beautiful northern lights. For this reason, you can still add a visit to the concert hall to your list of things to do in Iceland even if you have no intention of seeing a concert. Since it offers excellent space for exhibitions, conferences, cultural events or other meetings, the center is never in short supply of entertaining shows. Visitors who love music and great stage plays must add it to their travel list. 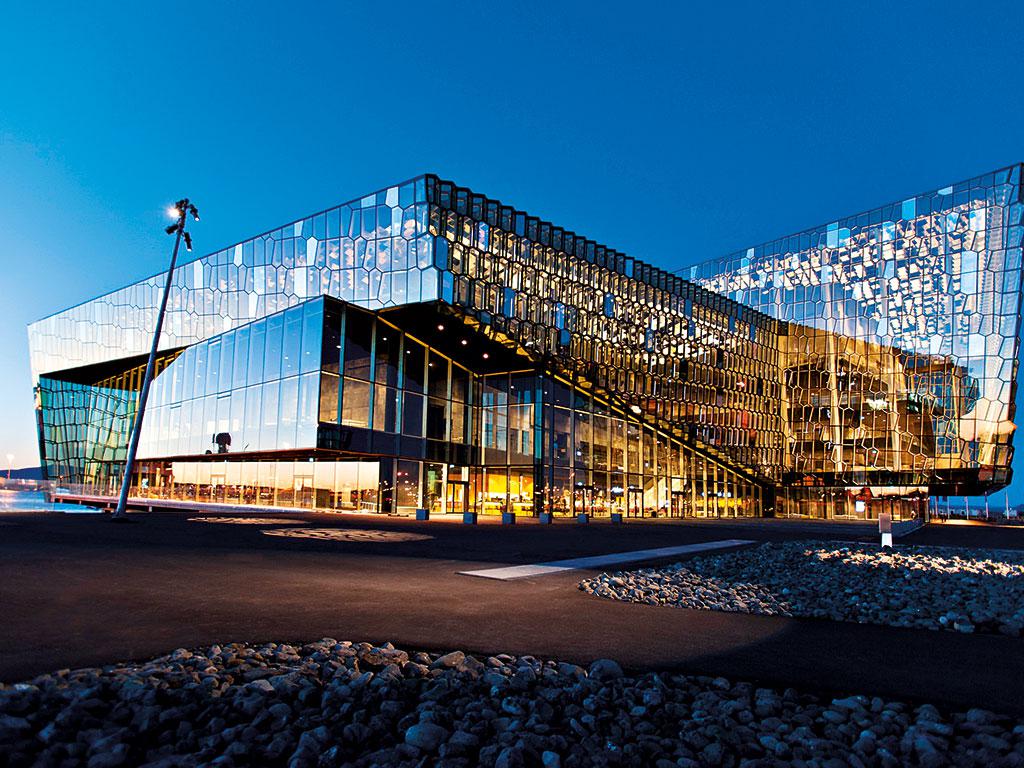 7. Wonder at the Contrast of Colours in Jokulsarlon

This is one of the places in Iceland that showcases the country's color drama. At Jokulsarlon, the view of bluish-green water topped with sparkling bright blue glaciers is better seen than described. The glacial lake ranks high on the list of places to go to Iceland. There is also the Diamond Beach, the black sand beach that stretches out into the distance. You will be amazed to discover that Diamond Beach sparkles at dawn, sunrise, and sunset, because of the ice-cubes and crystals that have washed up on the beach. 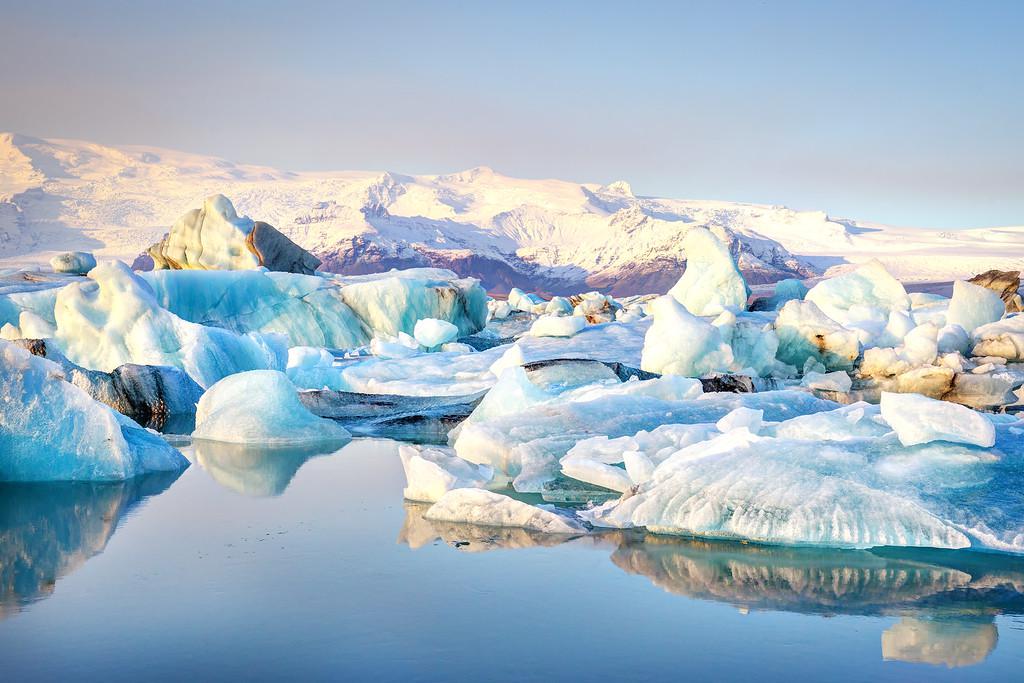 8. Strokkur Will Leave You Hot and Cold with Delight

Strokkur is a hot spring that erupts and spouts water up to 40m in height. This fountain geyser, located in the geothermal area in the southwest area of Iceland, was created by an earthquake, which helped open up the geyser's conduit. The much-visited geyser can heat up to about 200 degrees Celsius before intermittently shooting up in the air. 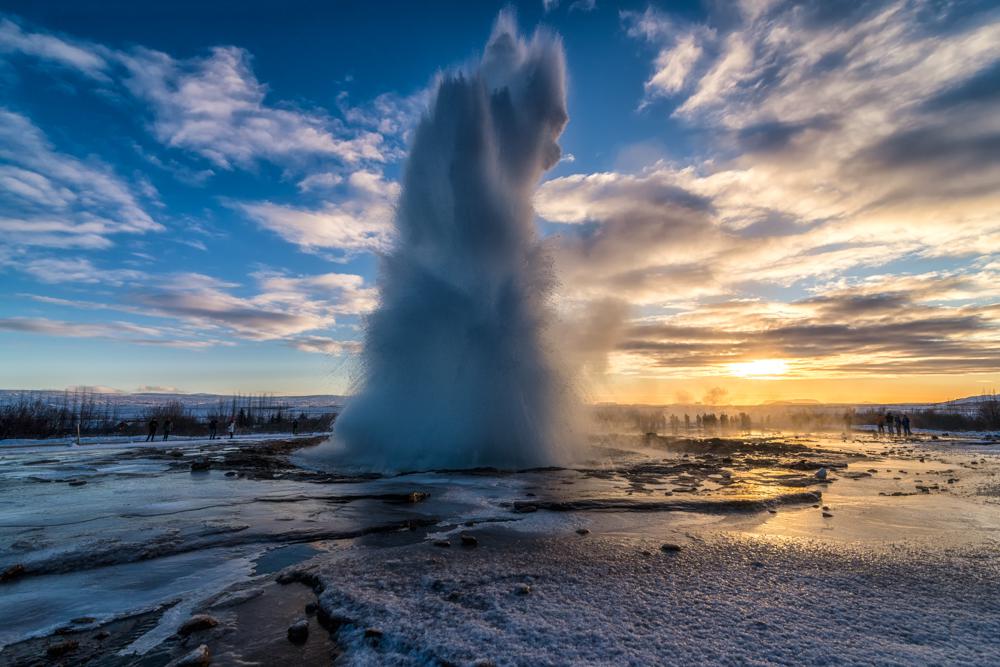 9. Luxuriate at the Blue Lagoon

According to a visitor, "The Blue Lagoon Spa is amazing! Freezing cold weather and the spa water remained very warm." The water, which remains at 39 degrees Celsius even in the bitterest of winters, has skin-enriching properties like silica, sulfur and a host of other minerals. The geothermal spa offers in-water massages, mud treatments, sauna and steam rooms, an indoor artificial waterfall, and a relaxation area. You will be tempted to ditch your clothes in favor of a bathing suit, even if you haven't worn one in a while. You should book tickets to the spa before you travel because Blue Lagoon's popularity makes it hard to get a booking on short notice.

Iceland is a country of many wonders and glorious sights. A record number of tourists visit the country all year round because of the beautiful places, the rich culture, and excellent food. Include Iceland in your list of adventurous places and treat yourself to colorful sights and vibrant sounds that the country has to offer.